In March 2020, the pandemic of COVID-19 required a rapid shift in teaching and learning practices from traditional, in-person strategies to online or physically distanced and masked approaches. All but one clinical partner cancelled in-progress clinical rotations. Guided by the Theory of Careful Nursing, a BSN Degree Program launched a cross-cohort collaboration, whereby seniors would mentor juniors in the use of software for clinical substitution and serve as assistants in skills and simulation labs. The goals of this collaboration were to keep students moving forward in their curriculum and to address the need for unbudgeted resources. The ability to react quickly and positively to sudden changes in any environment provided students with valuable clinical learning and immersion in trustworthy collaboration. Lessons learned not only facilitated uninterrupted progression in the BSN Degree Program but also developed desired knowledge, skills, and attitudes of new graduate nurses. Date: December 2, 2021. Time: 7:00PM – 8:00PM. Place: EVGT & Zoom: https://warnerpacific-edu.zoom.us/j/89677158895?pwd=YVZzb2g4OTJCOTh5ekZ0OXhVY2s2Zz09

If you have any questions at all, please feel free to reach out to our department and ask, and we would be more than happy to answer them to the best of our abilities. All the best,   Academic Success WPUTutor@warnerpacific.edu

“Chaplains are essential to higher education where students are seeking to explore and deepen understanding of their faith and who they are to be in this world,” noted President Dr. Brain Johnson. “By accompanying students through their demanding schedules, Rev. Wilson can address questions, doubts, failures as well as illuminate and ignite purpose in our students.”

For 30 years Dr. Wilson has served in national and international ministry. As a University Pastor and church planter he has started congregations across North America, and matriculated through several Universities of higher learning. Angulus has a Bachelor’s Degree in Social Work from Fresno Pacific University, a Master’s Degree in Spiritual Formation and Evangelism from Wheaton College, and Doctorate of Ministry from Azusa Pacific University.

Because of his passion for making disciples and equipping students for the work of ministry, he develops International Bible Schools, conferences and seminars to train leaders for Christian service.

“There is no greater joy than to serve students in this critical time of formation on their journey, said Rev. Wilson. “To be an exegetical guide in their maturation is worth more than the tongue can tell. I’m truly honored and excited to be a part of the Warner Family.”

Rev. Wilson is married to Sharon Wilson, and together they have shared the wonderful duty of raising three sons. 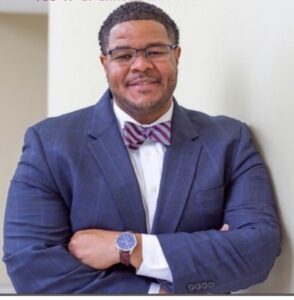 Warner Pacific University (WPU) is pleased to announce Dwight Sanchez as its new Vice President for Enrollment and Recruiting. The university looks forward to benefitting from his proven track record to expand WPU’s enrollment efforts not only in the Pacific Northwest, but throughout the country and other countries as well. In this role, Sanchez will have the responsibility of accelerating a comprehensive enrollment management plan overseeing undergraduate and professional and graduate student enrollment, enrollment and retention marketing, as well as Student Financial Services/Financial Aid.

“Dwight is creative and highly innovative as well as data-driven and outcome-focused,” noted WPU President Brian Johnson. “This unique proven skill set will take us to the next level in expanding enrollment channels and ensuring stability in higher education’s highly competitive markets.”

Sanchez, an Afro-Latino, is bi-lingual and earned his bachelor degrees from JCSU in both Spanish and English. He also holds certificates in Enrollment Management Leadership as well as College Admissions Harvard Summer Institute on college admissions.

Reminder!  This is the last week to participate in the Mental Health Needs Survey.  Check your WPU email for the the link. You are invited to participate in a confidential survey to help the Counseling Center understand areas of challenge and growth for WPU students.  Our goal is to better serve the mental health needs of our community, and this survey will give the faculty and staff insight into ways we can foster health and wellness at WPU.

The technical stuff: You’ll receive four reminder emails with a link to the survey, but please fill it out only once.  It should take about 15 minutes.  You must be 18 or older to participate.  The survey does not collect your personal information unless you’d like to provide your email address for additional resources.  The survey does ask for demographic information, but you are free to skip any question in the survey.  Data will be kept confidentially in the Counseling Center and be presented in an aggregate form to avoid unintentional identification of students.  If you have any questions, please reach out to Hanna Maxwell at hmaxwell@warnerpacific.edu. Warner Pacific’s Academic Success Department is excited to announce that we are doing gift card drawing at the end of the semester for students who booked sessions with our academic tutors! This is all you need to do:

Gift card drawings will happen the week of December 6th – 10th, and winners will be contacted individually by the 10th.

These surveys help us see how our services are going and how we can continue to provide intentional supports for all students. After each tutoring session you will receive an email with a survey link to let us know how things went. Each survey completion after a tutoring session will result in one entry for a gift card. If you worked with multiple tutors, or with a tutor more than once, you will contacted with the survey links for the sessions you did with tutors.

If you have any questions, please feel free to reach out to our department at: wpututor@warnerpacific.edu Fall semester is well underway, please make sure you are utilizing WPU’s tutoring services! Our services range from traditional services like essay reviews and math tutoring, to additional services to support students with items such as building out and reviewing their resume. Throughout the semester, we also try to provide evening workshops around topics that help students build on and develop new skills, such as our APA workshops or testing tips presentations. Visit our booking site to find new updates throughout the semester.

This service is completely free and user friendly. Just remind students that when they book a tutoring service, they need to leave a description of what they need support with, in the “Booking Notes” section, so that tutors know how to best support them. If you or your students have any questions or need help with anything, please contact the Academic Success Coordinator, Janice Nehren, at: jnehren@warnerpacific.edu Best of luck this semester!

Are you registered for Spring 2022? Do you need to make schedule changes?

The next two weeks (November 8 – 19) is Spring Schedule Registration Review. During this time, you are encouraged to connect with your advisor to review your spring semester schedule. This is a great opportunity to talk about your plans and make sure you are staying on track for graduation.

Need a refresher on MyWP? Here’s a website with helpful video tutorials on various topics, including course selection and registration: https://www.warnerpacific.edu/instructions-for-using-mywp/

If you have questions about your schedule or need assistance with registration, please contact the Records Office. You can visit us in upper Egtvedt, email us at records@warnerpacific.edu or call us at 503-517-1013. We’re here to help you!

Submit an Item
(Submitted items will be posted as soon as possible. Your WPU credentials are your log on and password.) Question? Problems? Email marketing@warnerpacific.edu